The number of freelancers is growing all over the world. Why? The world is always changing, and a lot of people are discovering that freelancing is the best way to support themselves. Not only because of the money but also because of the lifestyle.

If you’re not familiar with freelancing, you may have a lot of questions about who exactly freelancers are; exactly what types of work they do; and, very importantly, how much they earn.

Even if you’re a freelancer yourself, you may wonder what the experience is like for others and what the current freelance trends are.

Every year, financial services company Payoneer surveys freelancers worldwide to find out the answers to these questions. They have now released their Freelancer Income Report 2020, which surveyed over 7,000 freelancers from 150 different countries around the world. This study reveals some enlightening freelance statistics.

I’ve written up 11 short takeaways from the Freelancer Income Report 2020 so you can get some quick insight into the world of freelancing and find out the answers to any questions you might have. 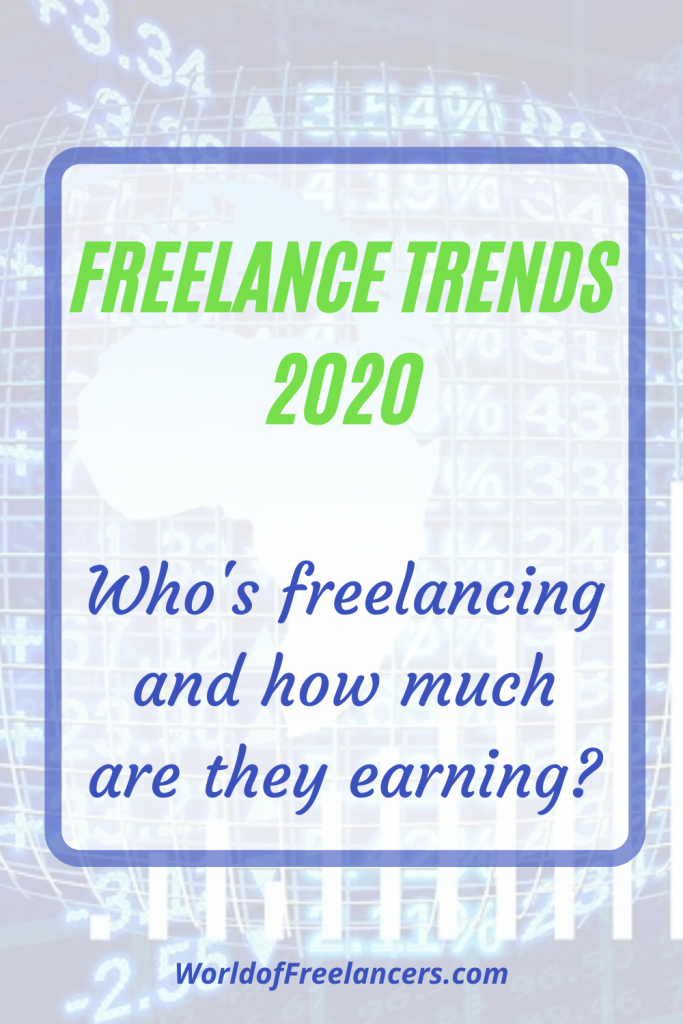 What do current freelance trends reveal about ages of freelancers around the world?

Not surprisingly, the freelance movement is led by younger workers. Almost 70% of freelancers surveyed are under the age of 35, and 21% are under 25.

Baby Boomers. The hourly freelance rate of 55- to 64-year-olds is almost twice as high as Millennial 25- to 34-year-olds and and higher still than Gen Z freelancers.

What are the most popular fields of freelance work around the world?

What freelance jobs pay the best?

What are average freelance rates worldwide?

Freelancers worldwide charge an average of 21 USD per hour. This is an increase of 2 USD per hour from two years ago. In most countries where the survey respondents are based, this is well above the average hourly salary that employees earn.

Do most people freelance full time or work a “regular” job with a freelance side hustle?

Do successful freelancers need to have degrees?

No. Actually, freelancers who have only a high school education earn more than their college-educated peers. This is because hirers care less about freelancers’ educations and more about their portfolios, ratings and experience.

Where do freelancers like to get their work done?

One of the many great aspects of freelancing is being able to work pretty much anywhere you desire. Not too surprisingly, though, most freelancers – 83% – prefer to work in the comfort of their homes.

Do most freelancers have high job satisfaction?

Do most people enjoy their freelance lifestyle?

The full Freelancer Income Report by Payoneer contains many more interesting findings. You can get the full report here.

If you want to learn about freelancing trends for the United States, read these takeaways from the Freelancing in America 2019 report compiled by Freelancers Union and Upwork.

You don’t have to have writing experience to begin earning income as a freelance writer.…

Most people have no idea how to start freelancing. That is totally understandable. Getting started…