“I’m definitely going to have to take a Tiwi Islands tour while I’m in the Northern Territory,” I decided. I was spending several days in Darwin while working and traveling through Australia, and I love learning about remote, indigenous cultures. Plus, it was almost my birthday. 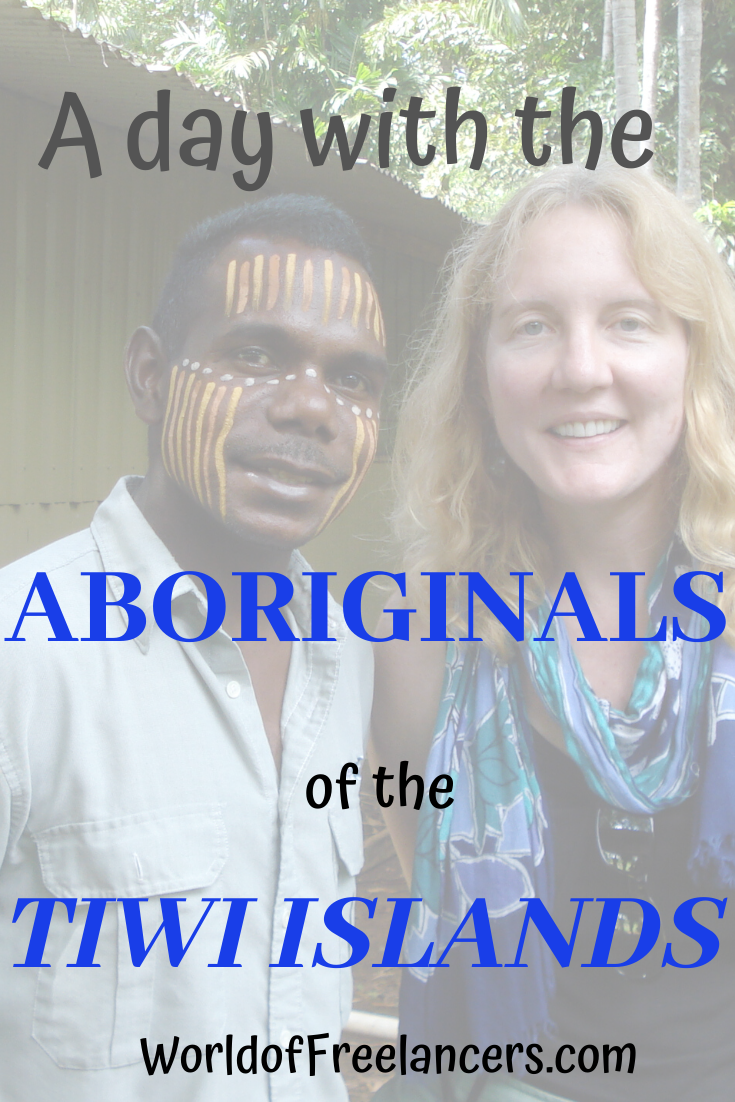 I learned that the only Tiwi Islands tours are day tours; no overnight tours existed, at least back in 2010 when I traveled to this incredibly fascinating island populated only by aborigines. I booked a day tour from Darwin which departed first thing in the morning.

I was told to stand alongside the road in the morning darkness just a few-minute walk from my hotel, where a van would pick up myself and the handful of other people going on the tour. The van whisked us to a small airport, where we boarded a tiny plane and slowly flew the 50 miles across the intersecting Timor and Arafura Seas, to the Tiwi Islands. 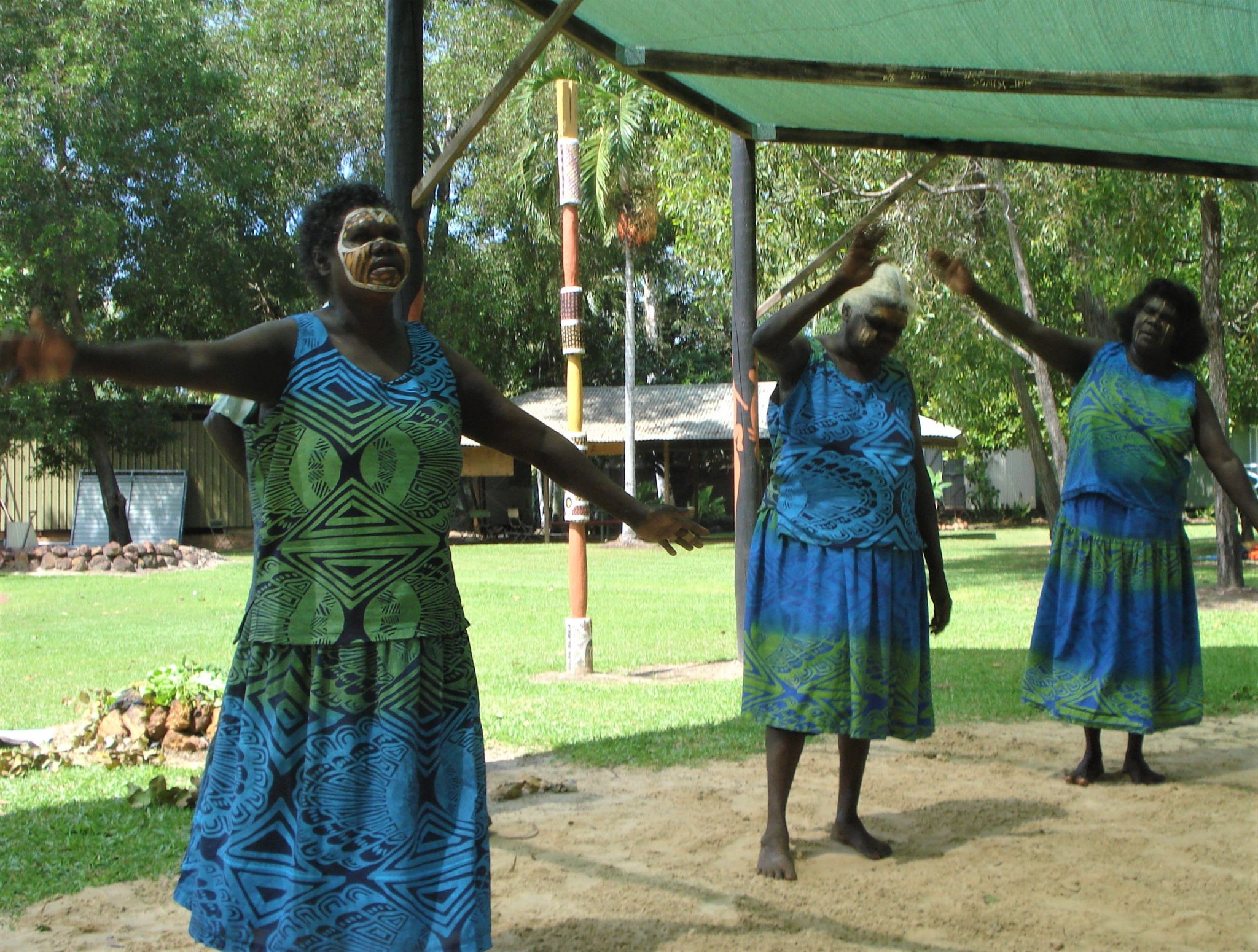 On the island, our driver was Australian and our guide, Romie Kantilla, was aborigine. Although, of course, aborigines are the original Australians themselves.

“The word Tiwi means ‘We are one,’” Romie said, “because my ancestors thought they were the only people on the planet.” Isolated from the influences which have brought into the modern world the 460,000 other aborigines spread throughout Australia, the native of these islands hold tightly to their traditional way of life. 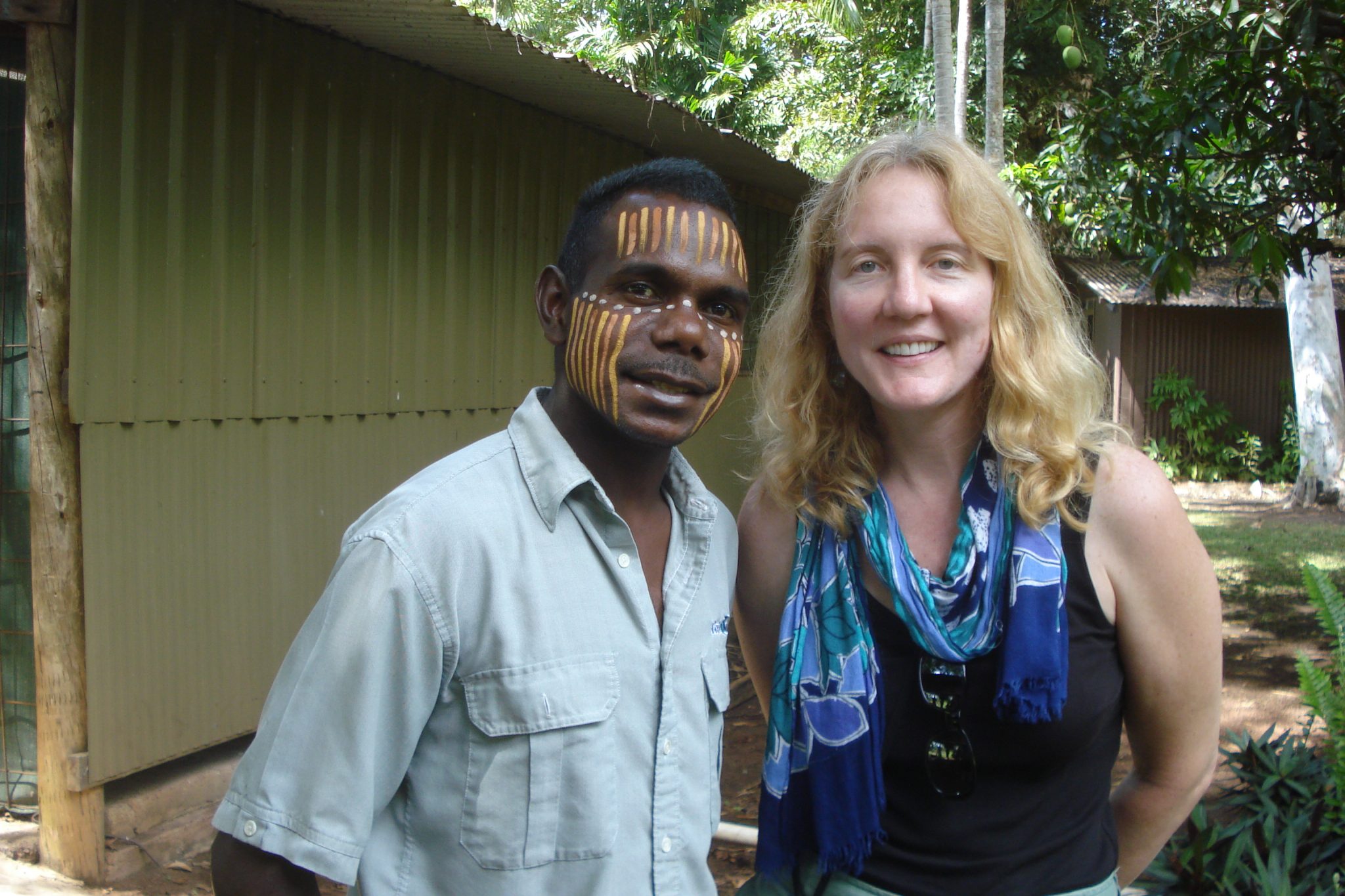 We rode through the desolate jungle island of Bathurst on my Tiwi Island tour, which along with the other Tiwi Island of Melville, holds 2,100 aborigines. Tiwi is not only the name of these islands; it is the language spoken by the island’s inhabitants.

Arriving at the Nguiu settlement, in a clearing of the trees a dozen indigenous men and women were waiting. They’d been cooking damper bread in the ground, and a man took a long knife and cut some for us. It was breakfast time, so we drank Billy tea and ate the bread while sitting on the ground.

After our bread and tea, the aboriginal women and men liquefied some ochre gathered from cliffs on the islands’ beaches. They painted their faces in white, orange and yellow patterns passed down from their fathers. 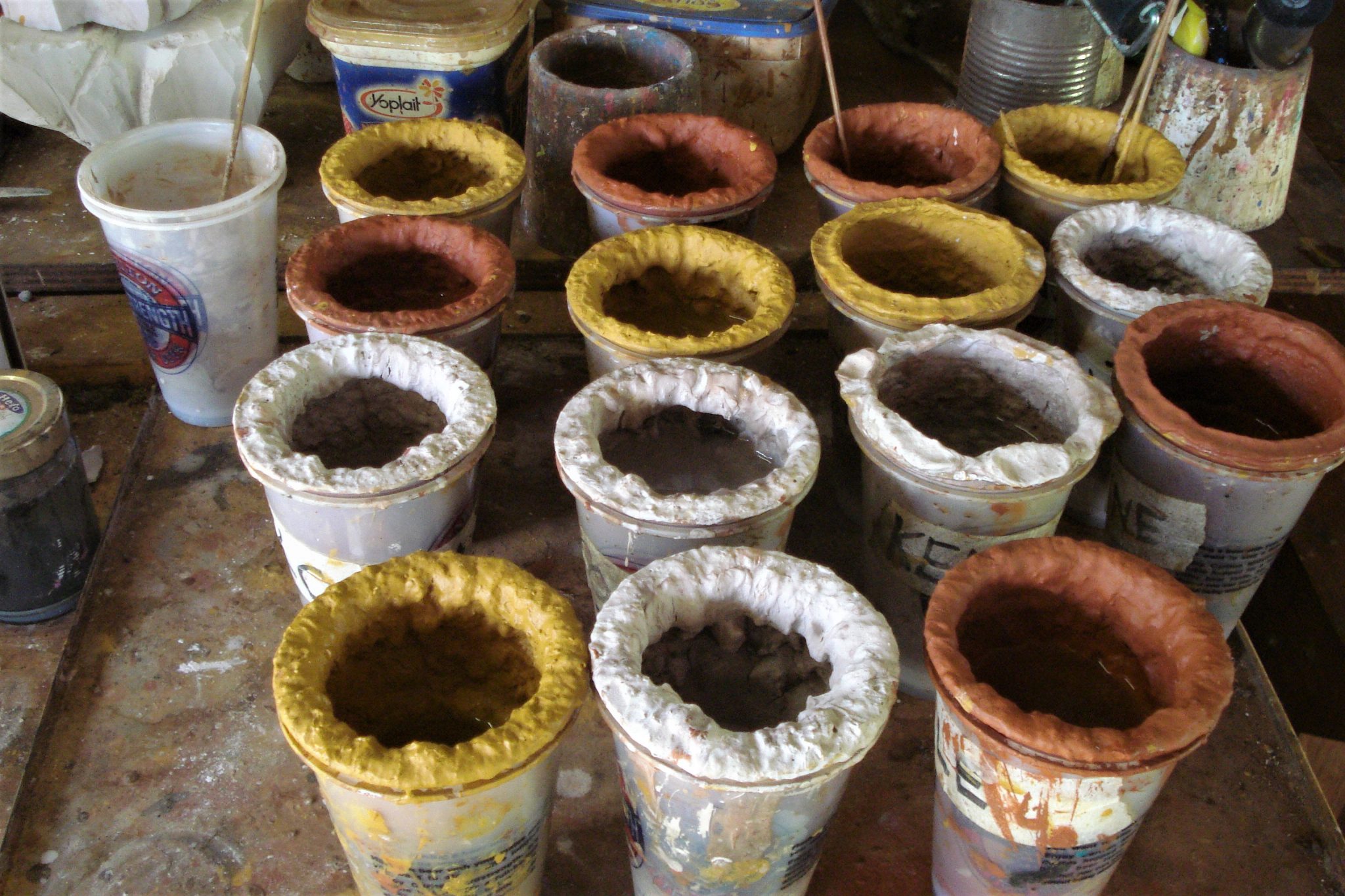 While they began to sing and clap together sticks from ironwood trees, we sat in a semicircle on the ground. In a “smoking ceremony” called Kumurrupunia, three of the island’s women brushed smoldering leaves quickly from our heads to our hands to chase away evil spirits that may have followed us to their land.

This ceremony was followed by their traditional shark dance and crocodile dance, which mimic the moves of the creatures after which they are named. These dances, Romie explained, are the Tiwi Islands’ equivalent of a handshake.

Like other Tiwi island traditions, the dances are handed down through the generations in an effort to keep their primitive culture alive. You can see one of the dances they performed in the video below.

Every Sunday the men pass their hunting skills on to their sons, when they take them into the bush to look for feral pigs, wallabies, copper snakes and iguana as well as buffalo. The latter have populated Melville Island since 1824 when the British brought ashore two, and their numbers have now multiplied to 200,000.

Romie’s hunting skills came to light when he walked off the road and strode silently into the bush, crouched beneath a tree and quickly reached up. He walked back to the road carrying a light brown reptile with a bold orange fan of skin encircling its neck. “A frilly neck lizard,” he said, passing its long tail into my hand for me to hold. 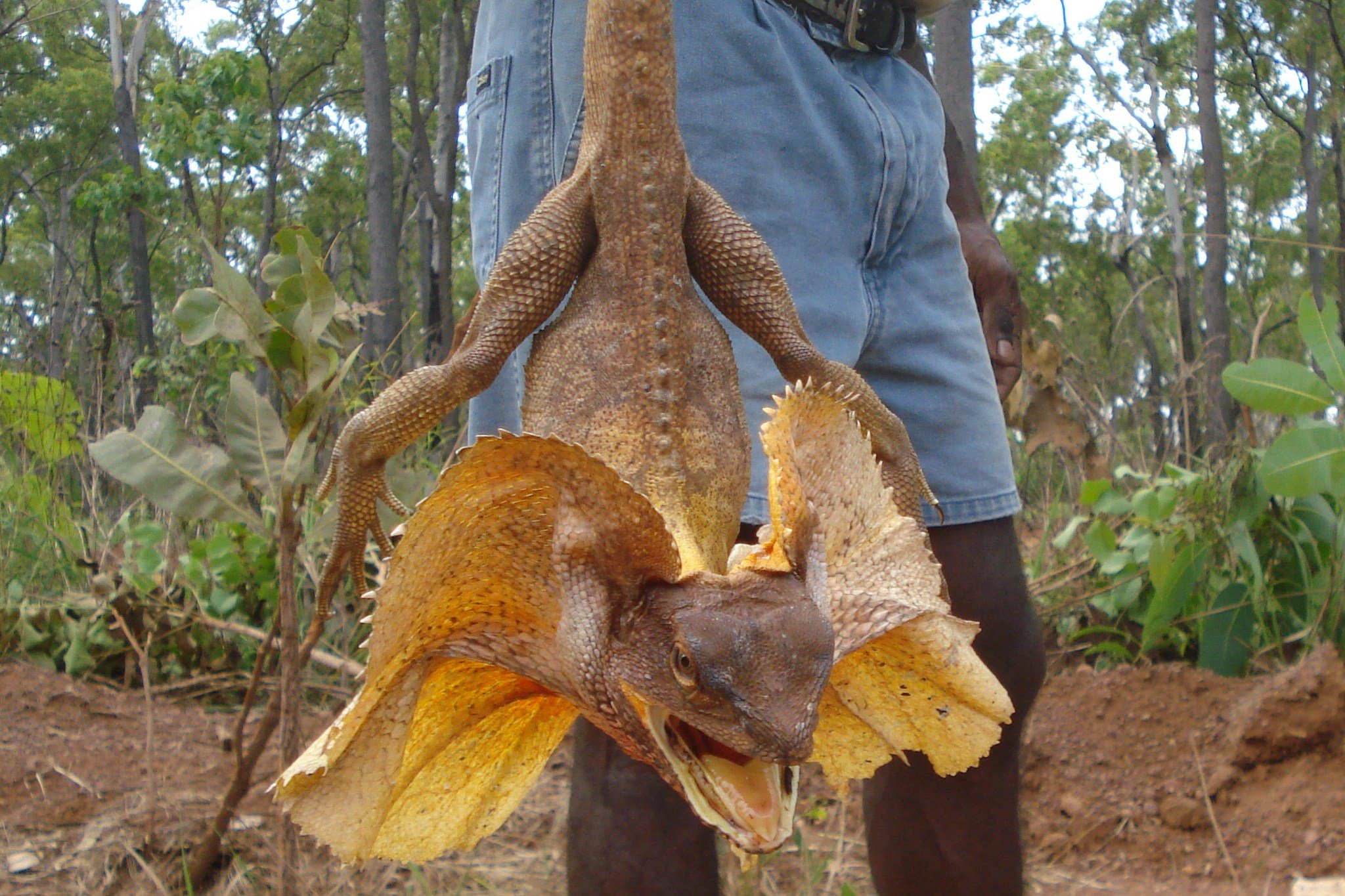 These aborigines choose to pass along their hunting skills but follow other traditions out of what they believe is necessity. With their numbers so small and their lives on the islands so remote, they follow centuries-old measures against inbreeding. Throughout life, all contact, including eye contact, is forbidden between brothers and sisters as well as cousins of the opposite sex.  When someone is approaching life’s end, finally they are allowed to look their close relatives in the eye and reminisce about lives shared yet separated by cultural necessity.

The aborigines of the Tiwi Islands want to keep this and all their traditions alive for as long as they inhabit the earth. “I would be sad losing that culture,” Romie said. “I want to keep it strong. I want it to carry on. I don’t want to lose it.”

Art is an important part of aboriginal life on the Tiwi Islands, and many of the island people create a variety of forms of artwork. At the Ngaruwanajirri Art Museum we watched local artists creating paintings and scarves using the batik technique. They also had a shop where you can purchase their art, and I believe even more such shops exist on Bathurst Island today. 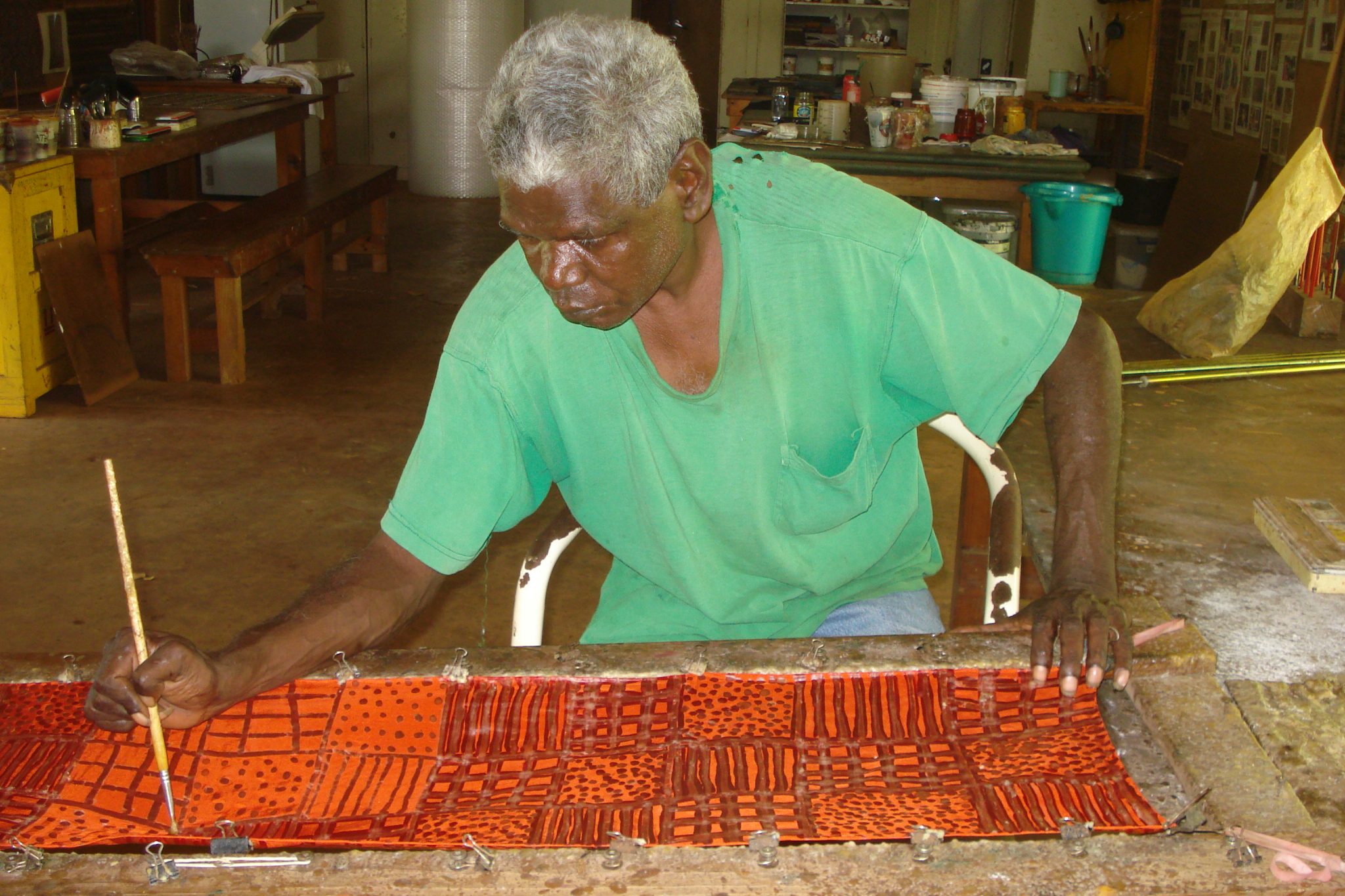 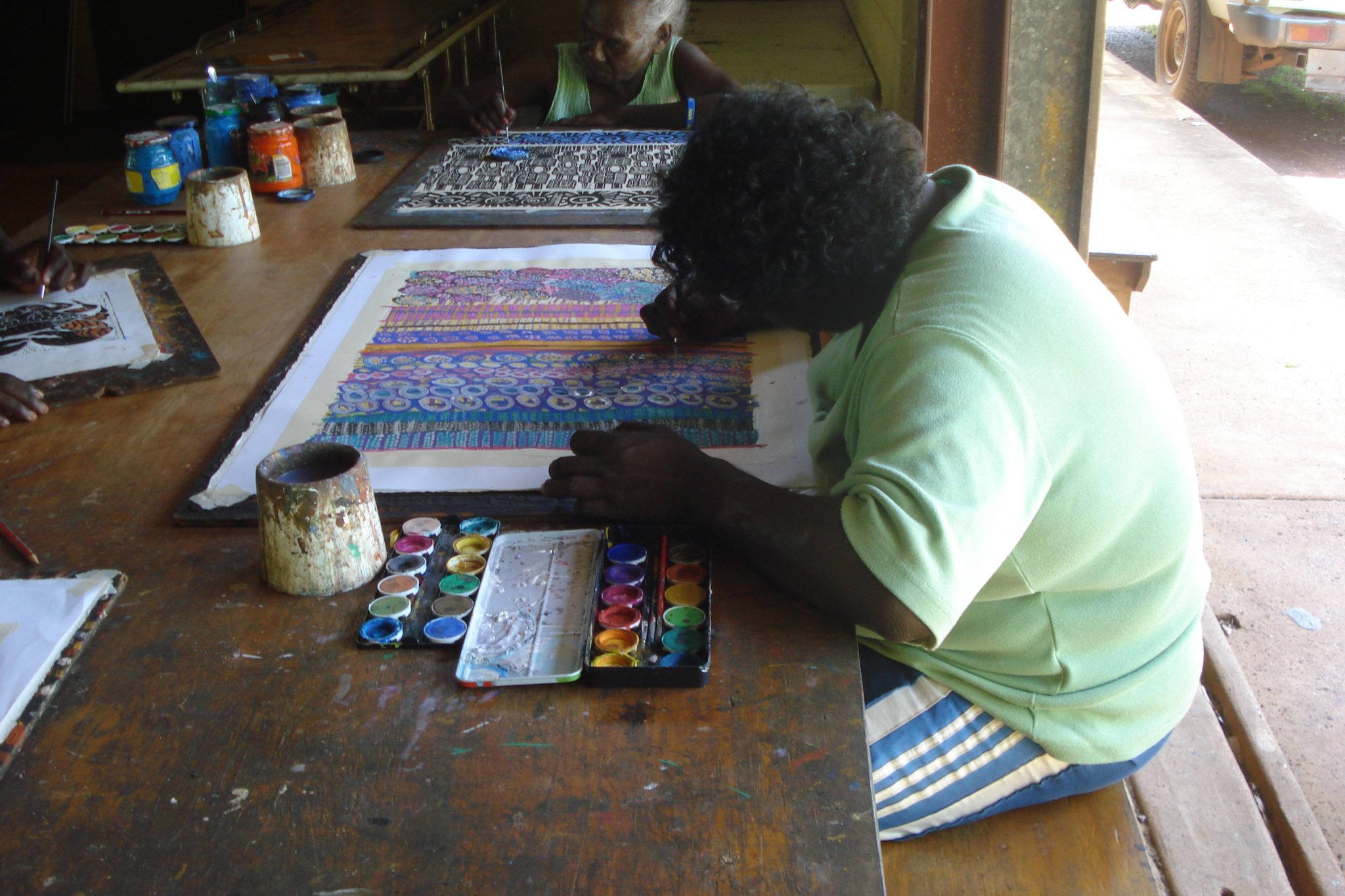 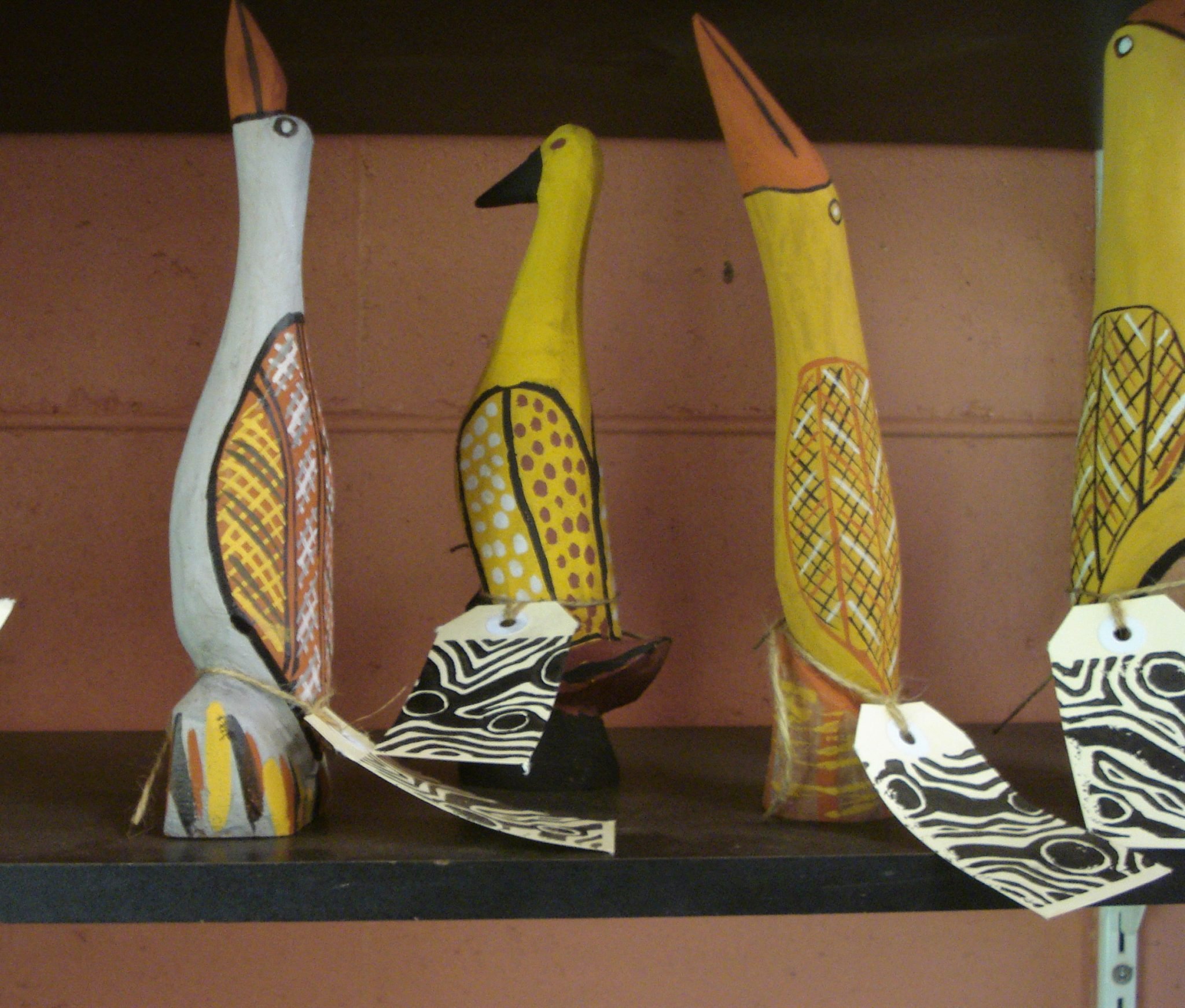 We drove on through the jungle to a sort of picnic area at a water hole where teenagers and small children were swimming. Some of the group sat down to eat, while others of us went deeper into the jungle with Romie. 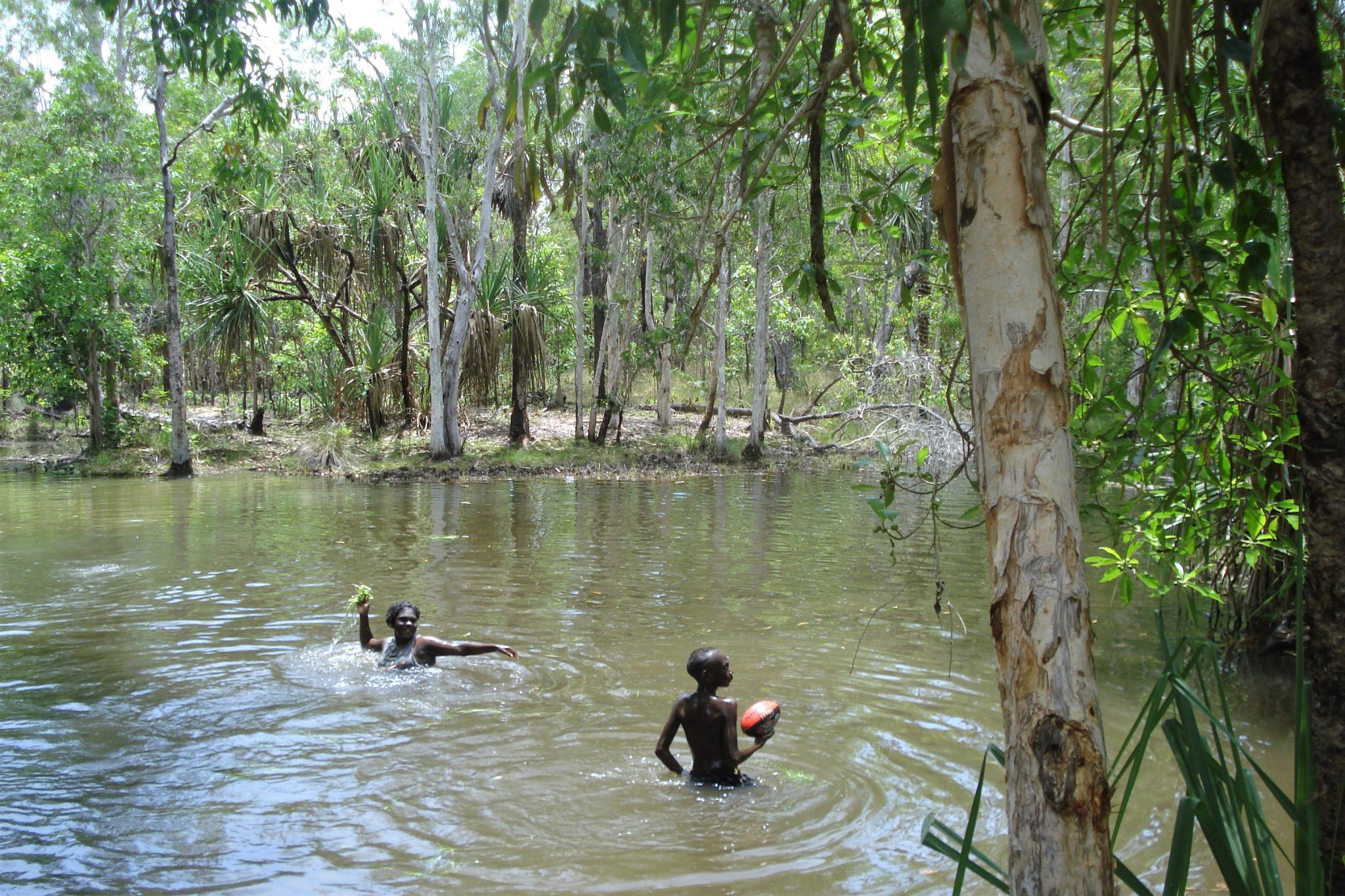 I figured this would be more interesting than eating, and what Romie had to say about the native foliage and wildlife definitely was interesting. However, I learned when we returned to the picnic area, while we were gone on our bush walk a group of teenagers had jumped out of the water hole and up onto the picnic tables, where they’d given an impromptu dance. I really wish I’d seen that.

What I did see and hear and taste and experience on my Tiwi Islands tour was an incredibly fascinating and hidden primitive culture still firmly tied to their ancient roots. Australia is a totally amazing country, and the remote Tiwi Islands was for me a huge part of the appeal of Australia.

You can sign up for a Tiwi Islands day tour to enjoy your own aboriginal cultural experience right here.